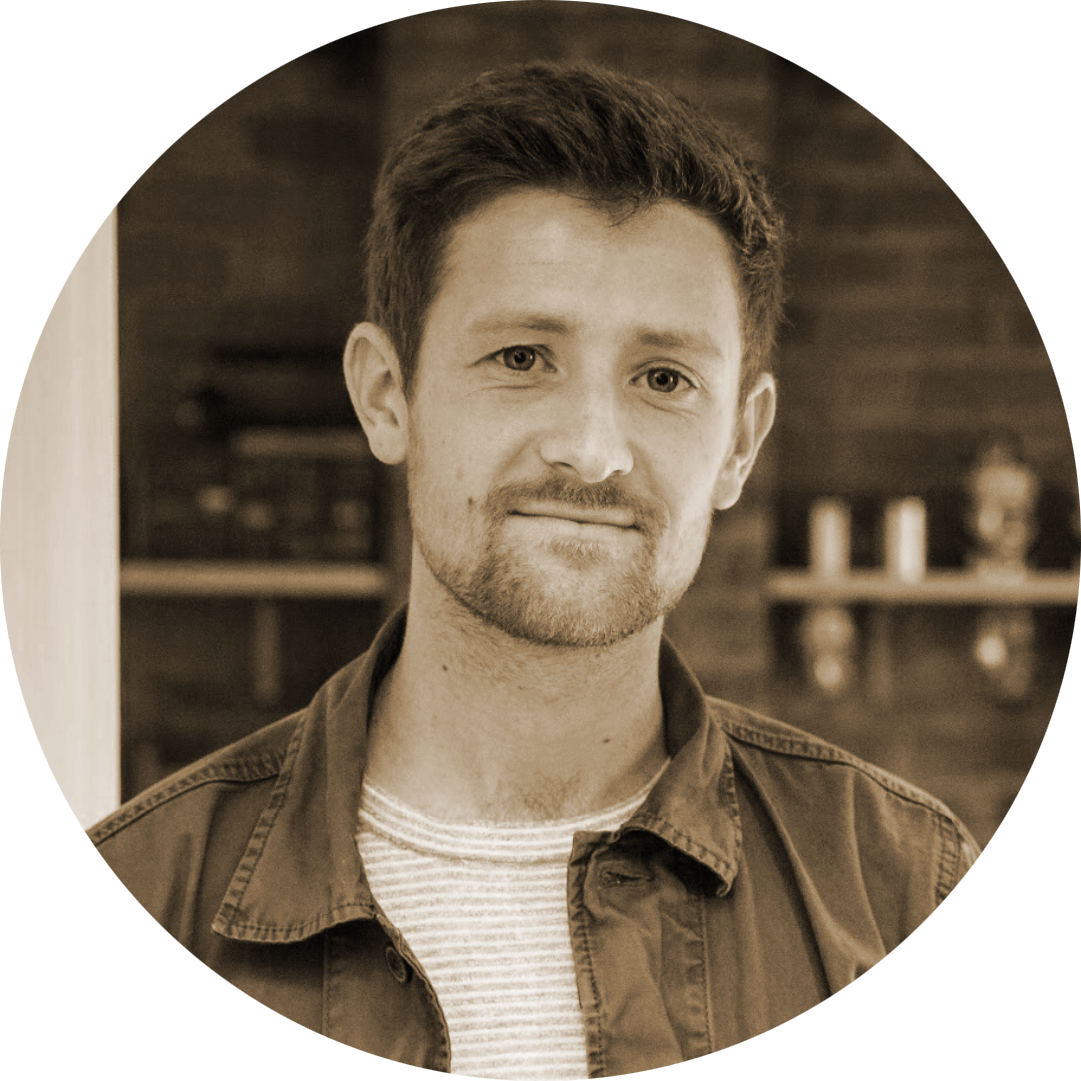 Ted studied at St. Mary’s University, gaining a BA (Hons) in Education in 2016. Whilst at University, he started making handmade leather goods, which led to bookbinding with James Brockman in 2018. Soon after he joined the Queen’s Bookbinding Apprenticeship Scheme, under the supervision of Glenn Bartley.

After the apprenticeship finished, he worked in a bindery in Oxford for one year. Awards include the Lisa Von Clemm prize for Best Newcomer in the Designer Bookbinders UK competition. As of 2022, Ted works for Brockman Bookbinders. 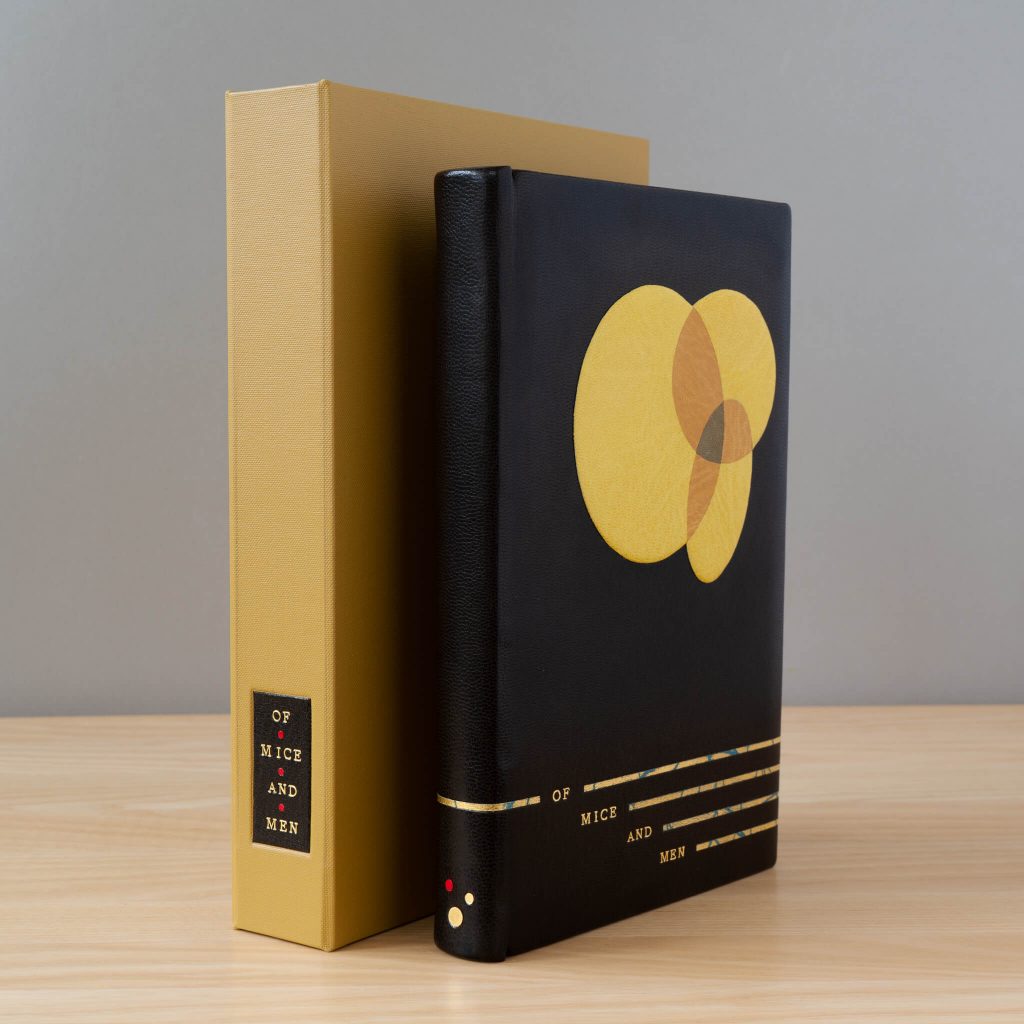 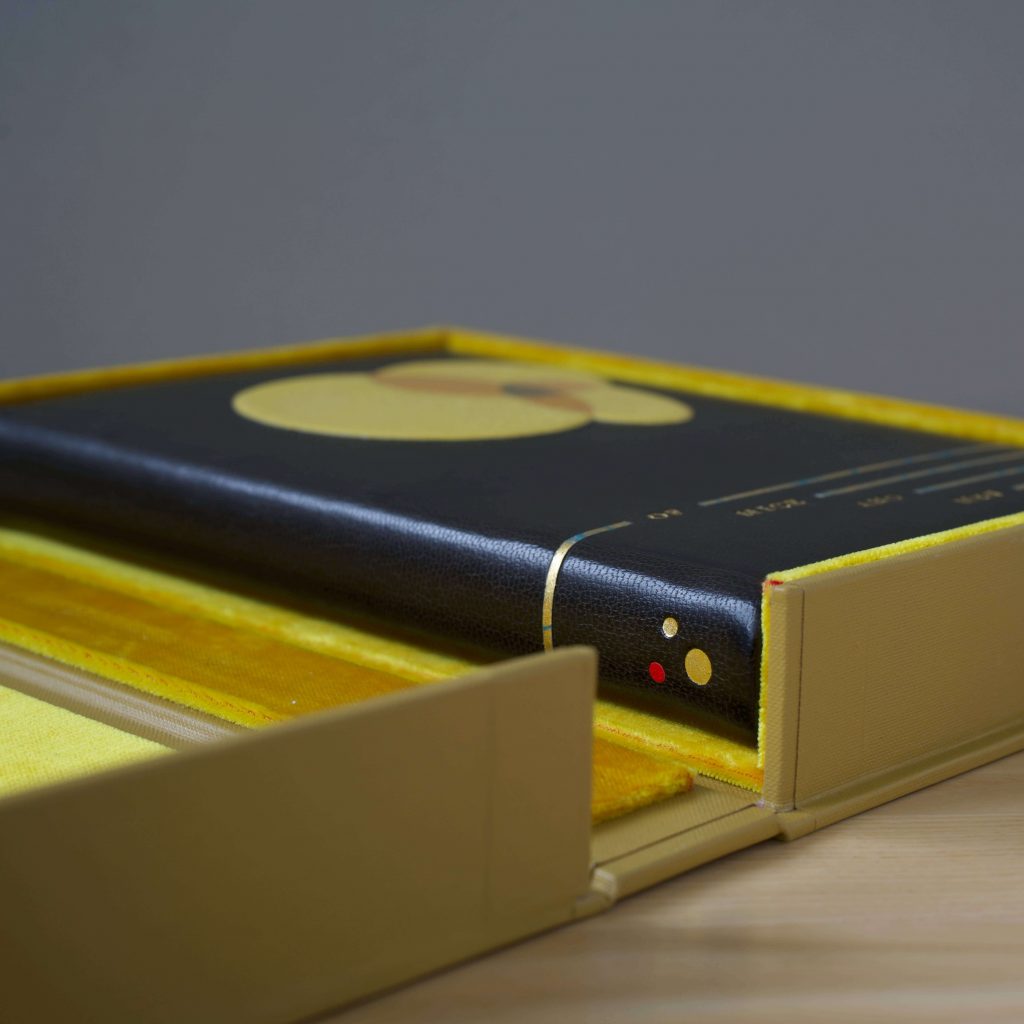 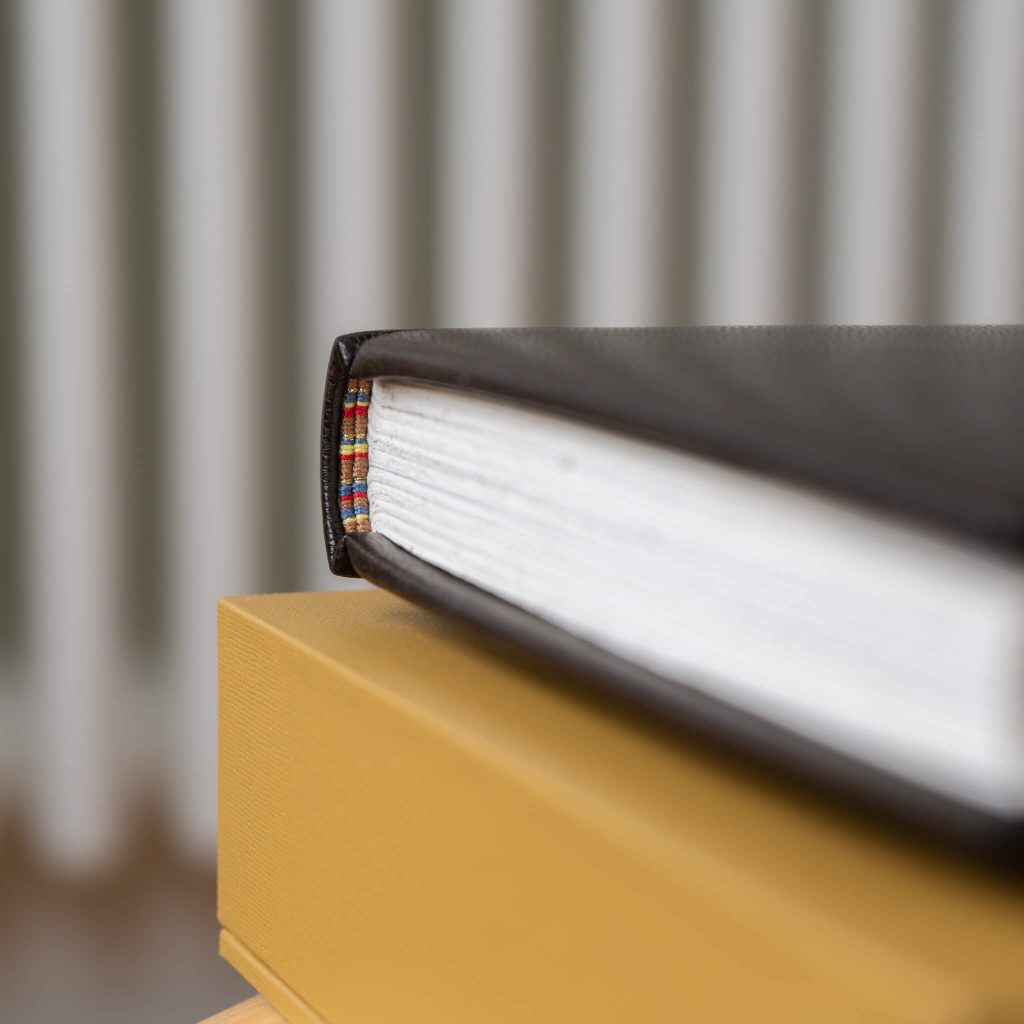 Bound in full goat-skin with leather recessed and raised onlays. Lettered with individual hand letters that compliment the title page using gold leaf. The colours chosen complement the illustrations and themes of the text. The edges of the book have been rough cut and sprinkled with gold ink. Hand-sewn double core end bands and textured paper end papers for the pastedowns. The design draws inspiration from the text and represents the high sun reflecting on water, the shadows and passing of time.

A Brief History of Time by Stephen Hawking
Bantam Press, 2018 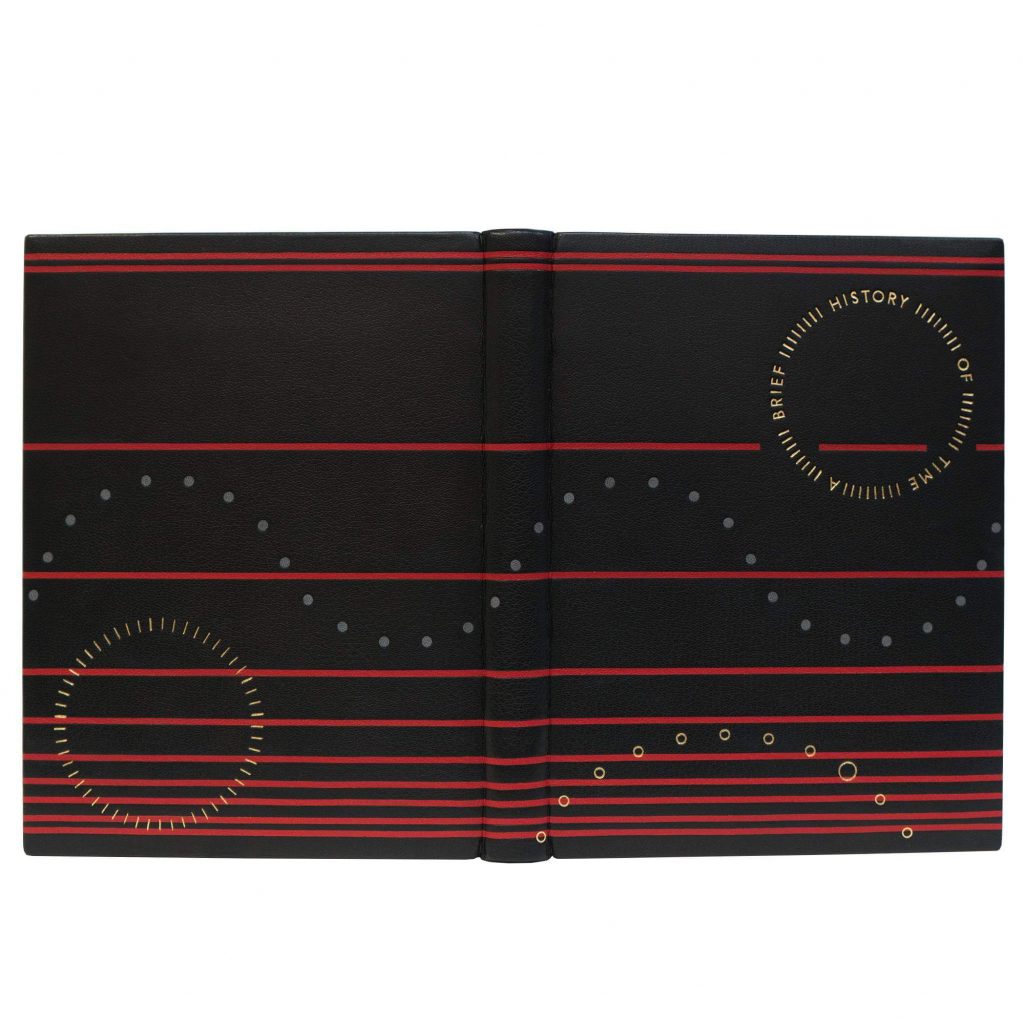 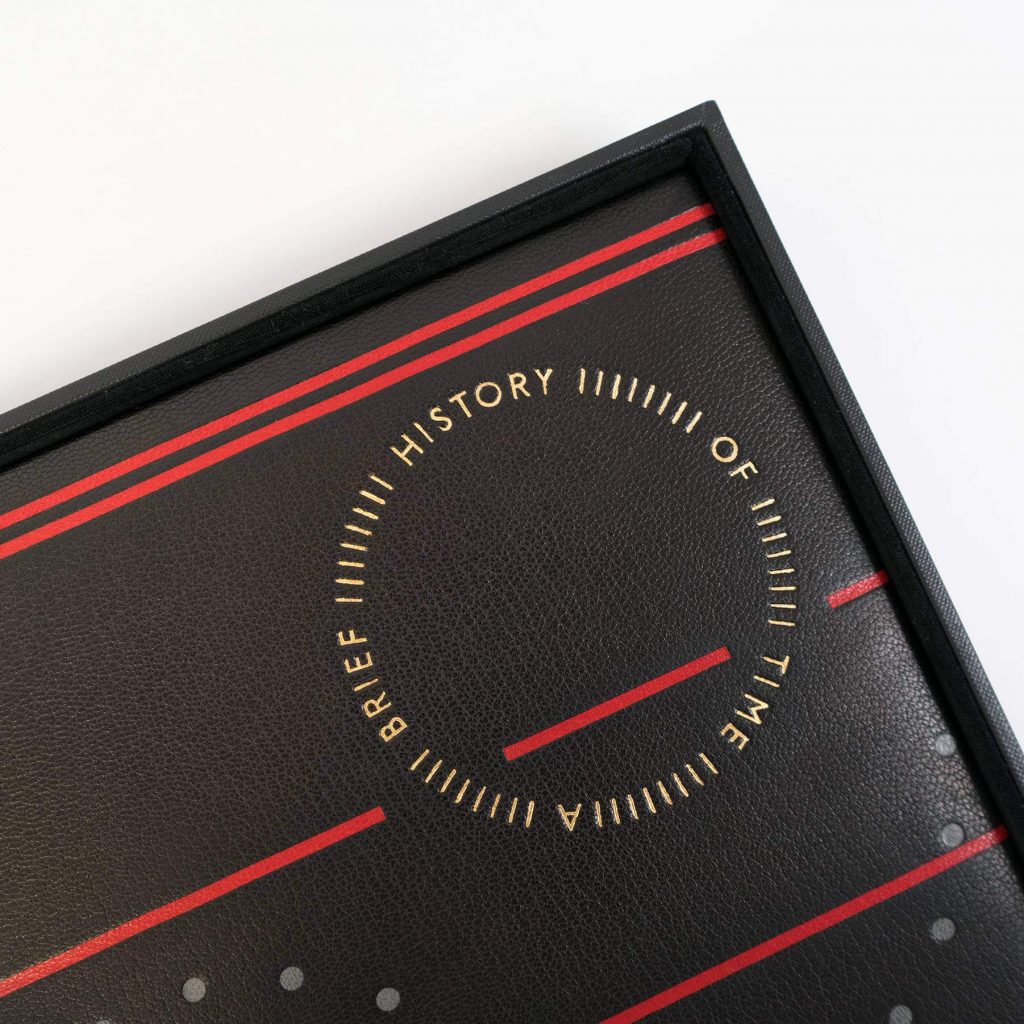 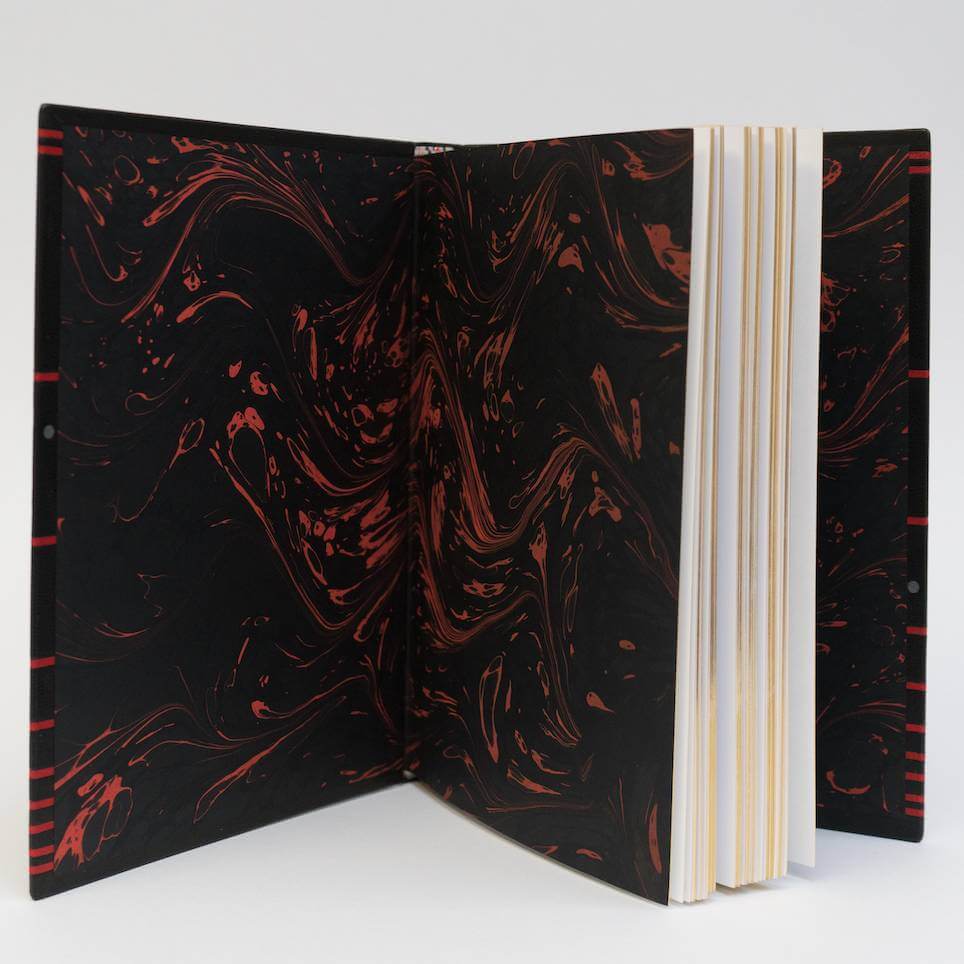 The book is sewn on five tapes, covered in Black goatskin. Onlays of red and grey goatskin. The binding has double core hand-sewn endbands, three gilt edges and marbled paper ends. The design was tooled with gold leaf. Housed in a full buckram drop-back box with leather label and velvet pads. 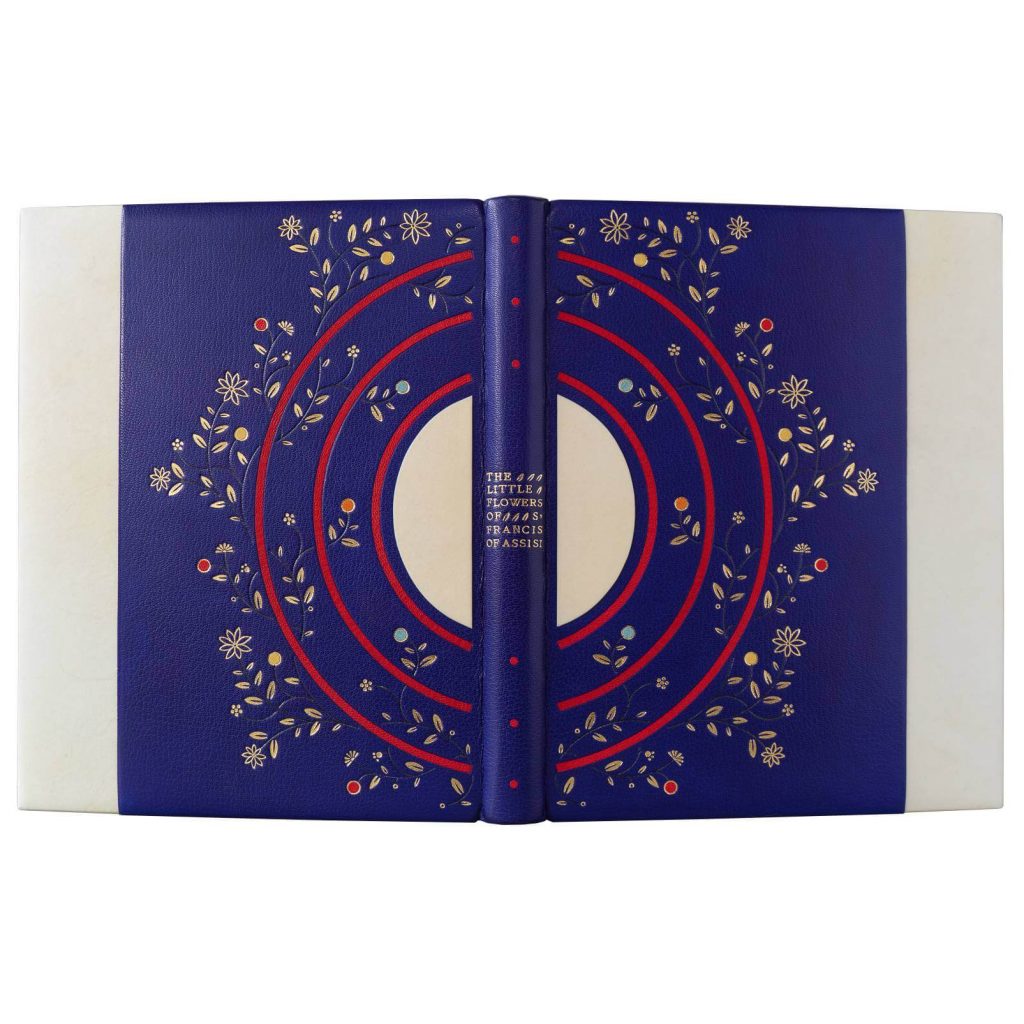 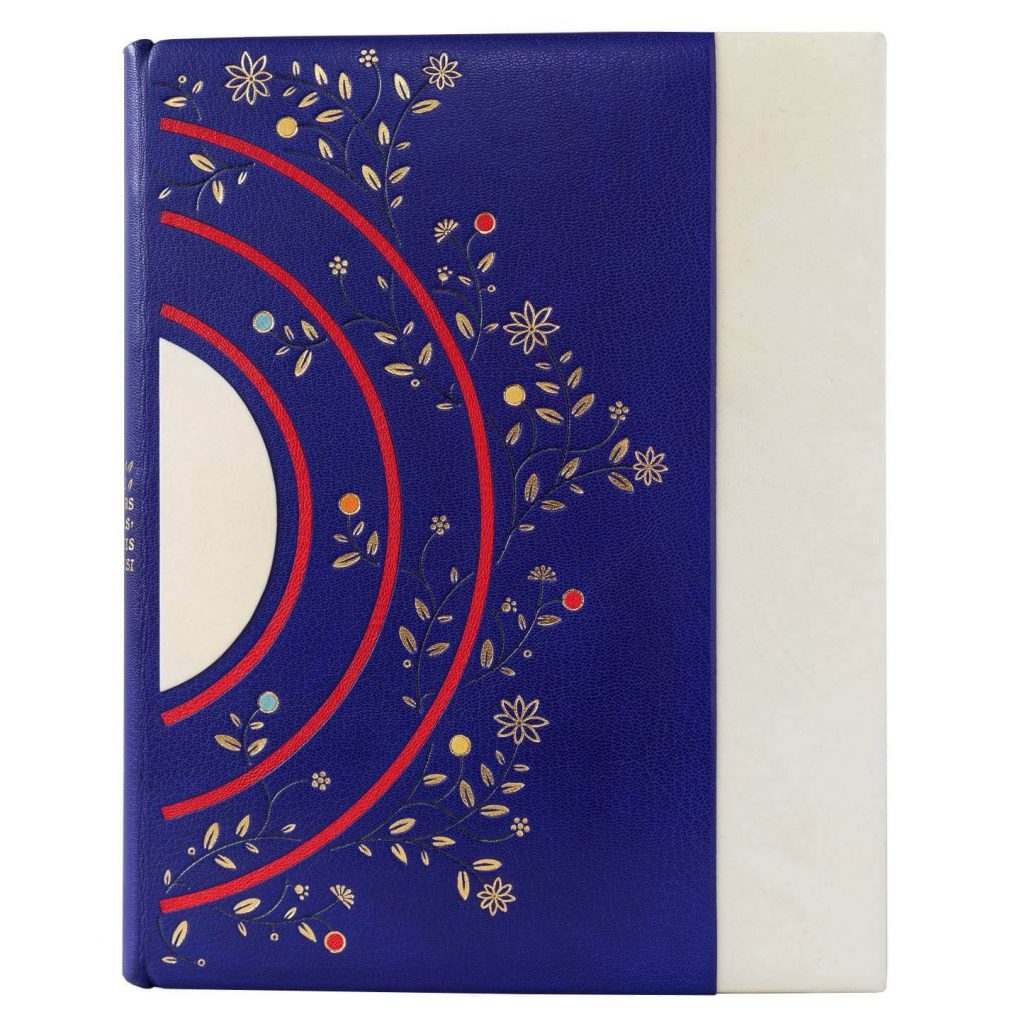 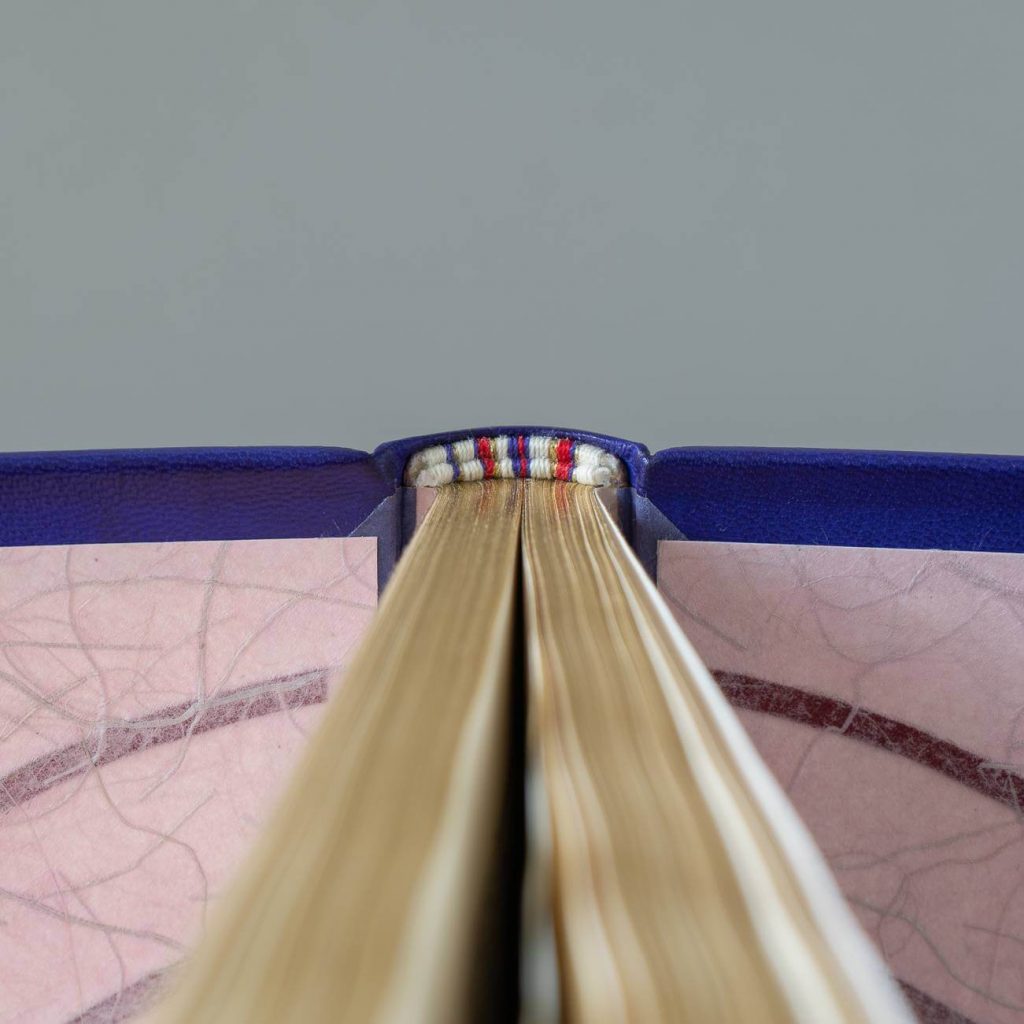 The book is sewn on five tapes, covered in purple goatskin with foredge strips of vellum. Onlays of red, yellow, blue and orange goatskin were used alongside raised vellum onlays. The binding has double core hand-sewn endbands and three gilt edges. The design was tooled with gold leaf and black ink. Housed in a full buckram drop-back box with leather label and velvet pads. 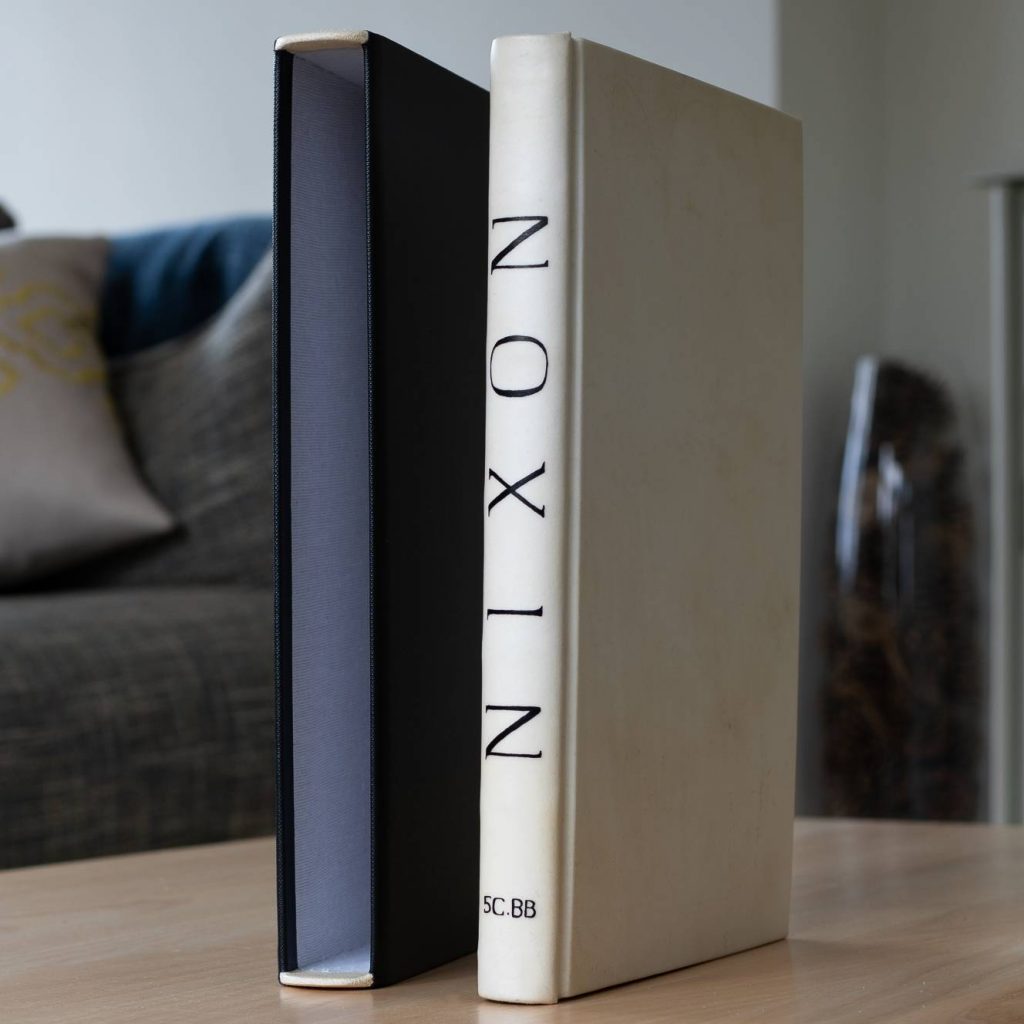 The book is sewn on five tapes, covered in full vellum over boards. It has single core hand-sewn end bands. The binding has a hand painted calligraphic spine and simple board design on turn-ins tooled with gold leaf and black ink. Housed in a buckram slipcase with alum-tawed leather at the head and tail.

Page load link
We use cookies on our website to give you the most relevant experience by remembering your preferences and repeat visits. By clicking “Accept All”, you consent to the use of ALL the cookies. However, you may visit "Cookie Settings" to provide a controlled consent.
Cookie SettingsAccept All
Manage consent

This website uses cookies to improve your experience while you navigate through the website. Out of these, the cookies that are categorized as necessary are stored on your browser as they are essential for the working of basic functionalities of the website. We also use third-party cookies that help us analyze and understand how you use this website. These cookies will be stored in your browser only with your consent. You also have the option to opt-out of these cookies. But opting out of some of these cookies may affect your browsing experience.
Necessary Always Enabled
Necessary cookies are absolutely essential for the website to function properly. These cookies ensure basic functionalities and security features of the website, anonymously.
Functional
Functional cookies help to perform certain functionalities like sharing the content of the website on social media platforms, collect feedbacks, and other third-party features.
Performance
Performance cookies are used to understand and analyze the key performance indexes of the website which helps in delivering a better user experience for the visitors.
Analytics
Analytical cookies are used to understand how visitors interact with the website. These cookies help provide information on metrics the number of visitors, bounce rate, traffic source, etc.
Advertisement
Advertisement cookies are used to provide visitors with relevant ads and marketing campaigns. These cookies track visitors across websites and collect information to provide customized ads.
Others
Other uncategorized cookies are those that are being analyzed and have not been classified into a category as yet.
SAVE & ACCEPT
0
0
Your Cart
Your cart is emptyReturn to Shop
Continue Shopping
Go to Top